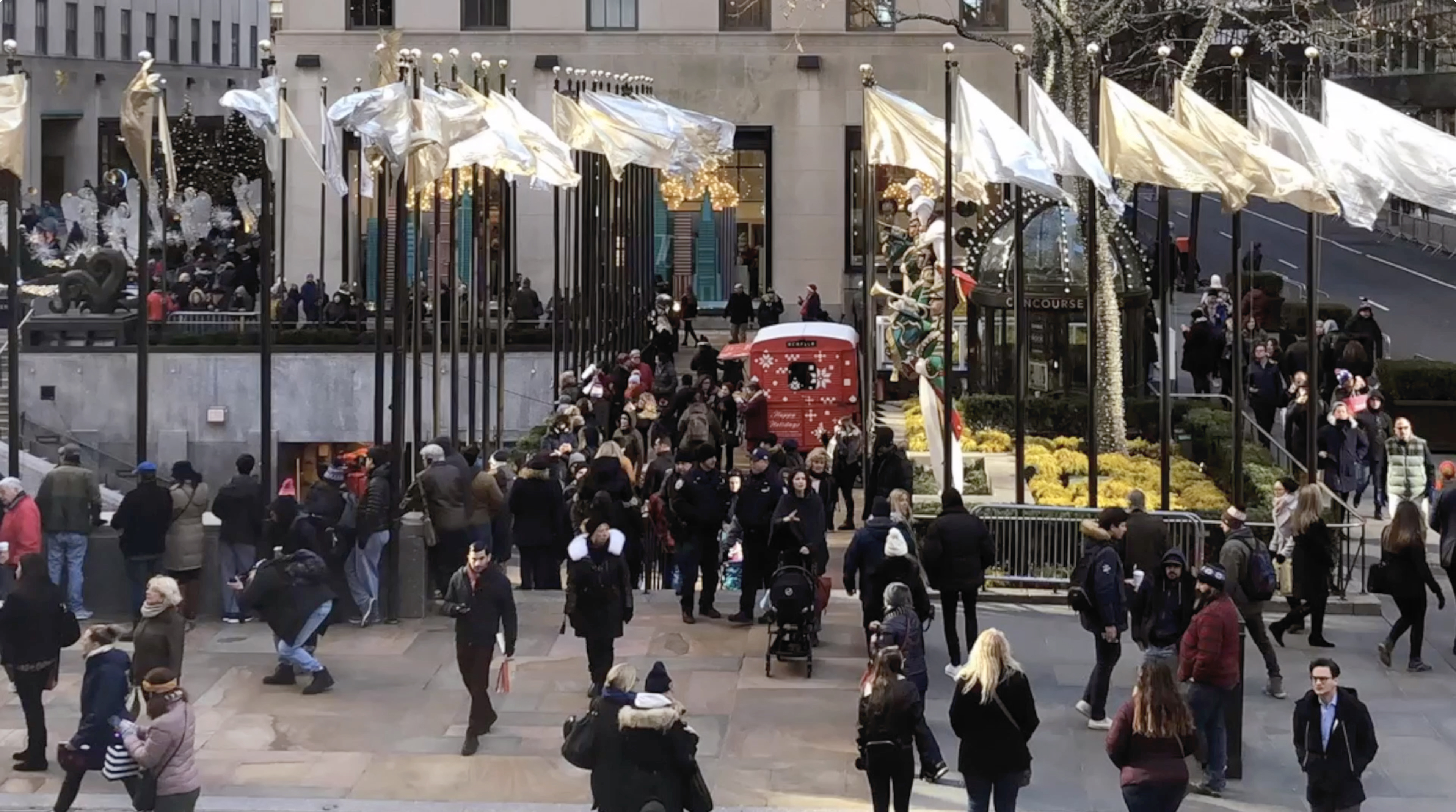 Time, technology, and the act of looking in Sarah Spengler’s Stills

Stills was shown at Currents New Media Festival 2019, as well as the exhibition Reprise at Currents 826 in August 2019

Vision is a subjective experience. What a person actually sees is influenced by their culture, knowledge, thoughts, physical condition and emotional state. My work calls attention to the process of seeing, using technology to offer heightened awareness. While photography freezes a moment in time, this work uses augmented reality to juxtapose stillness and motion, permanence and change.

A small wooden desk waits for a participant. In rows on either side of a black cloth, a series of printed photographs on aluminum are presented, upright and orderly, to be selected by the hand of the person sitting at the desk. Once in hand, the photograph can be held over the black square, illuminated from above, and suddenly a monitor situated on the other side of the desk from the participant displays a video in place of the photograph. Stills goes beyond a clever use of Augmented Reality (AR), and works to blur the lines between digital technology and tactile sculpture, still photography and video, what has past and the present moment.

A physical relation to the body – placing the participant at a desk and inviting them to hold a photograph in their hand – allows Stills to transcend the typical use of AR. Most augmented realities are trapped behind a screen, a reality that exists as an amalgam of physical and virtual space, but one that is perpetually beyond our reach inside of a device. In Stills, the device is hidden – a smartphone mounted inside of the desk – which allows the magic of the AR experience to become the significant effect. The desk and photographs become activated by a participant using the sculpture to reveal time, blending the present with moments of the past.

Following are two questions asked in conversation with Sarah Spengler about her inspirations for and interpretation of the work.

C: Who/what are some of your artistic or conceptual kin?

Sarah Spengler: I have been deeply inspired by the work of Bill Viola.  The first time I saw his work in person, it felt revolutionary. Not only was he using imagery and sound in installations, but he did so in a way that gave his audience an immersive experience. One of my favorite things about Stills is watching viewers discover that the still image in their hands suddenly becomes a moving image. It’s often a moment of surprise, wonder and even joy.

Viola’s ideas about perception and time have also had a profound influence on my work. I often quote his writing: “Landscape can exist as a reflection on the inner walls of the mind, or as a projection of the inner state without.” A strong theme throughout many of my pieces is the idea that vision is subjective.  I believe that what and how we see is dependent on numerous personal factors, including our language, our cultural knowledge, and our state of mind.

When I first started working on Stills, I was thinking about Viola’s earlier single-track videos, such as Ancient of Days, where he presents multiple scales of time simultaneously. I hike quite a bit and am frequently struck by how both stillness and signs of considerable change (fallen trees, rockslides, canyons) can exist at the same time. I also believe that beauty, or at least the constant play of light and sound, is made accessible through stillness, or what Viola calls “contemplative vision.” “Beauty” is both too loaded and too diminutive a term, though.  What I was really exploring in Stills is a state of consciousness or a sense of the ineffable that Viola describes as “that something else [that is] dimly felt behind the veil of everyday life.”(Bill Viola, Reasons for Knocking at an Empty House: Writings 1973-1994, p.174)

C: Could you elaborate on how you feel Stills addresses our perception of time and describe your use of AR to overlay two temporal realities, the moment of capture and the moment of replay?

S: I began working on Stills in earnest during a visit to the Grand Canyon. It is impossible to be there and not notice the juxtaposition between the geological scale of time (deep time) and the length of human existence. The contrast is both reassuring and disturbing, a shocking reminder of both our insignificance and our impact. If we imagine the life of our planet as the length of a year, Homo sapiens only appear a half-hour before midnight on December 31st.  How could one species alter the planet so quickly? We have been busy.

Standing at the rim of the canyon, I had the sense that I was witnessing these two different time scales simultaneously. The ongoing deep carving of the land by a river played in slow motion while the human activity on the surface seemed sped up to an almost comically fast pace. There was so much scurrying at the rim of the canyon, people racing to designated viewpoints to take selfies, that I felt like I was watching ants building a nest.

For me, photography has been a way to slow down and observe something deeply. I fell in love with photography in the 80s using film. Despite my fascination with and adoption of new technologies, I am concerned about the omnipresence of the pocket-sized, recording devices in mobile phones.  My use of AR in Stills, was an attempt to highlight the moment of capture and extend the moment of replay. I wanted to reference the snapshot while providing an opportunity for more intensive looking. Some of the videos in Stills are slowed down. Others repeat in endless loops or are made using stop- motion animation.

One of my goals in both my teaching and my art practice is to bring awareness to and prolong the act of looking. My favorite photography assignment, for example, is to have students “make the familiar strange.” I like to quote Russian theorist, Viktor Shklovsky:

Habitualization devours works, clothes, furniture, one’s wife, and the fear of war…. Art exists that one may recover the sensation of life, it exists to make one feel things, to make the stone stony. The purpose of art is to impart the sensation of things as they are perceived and not as they are known. The technique of art is to make objects ‘unfamiliar’, to make forms difficult, to increase the difficulty and length of perception because the process of perception is an aesthetic end in itself and must be prolonged.

I don’t believe that this is the only purpose of art, but slowing down looking and bringing attention to the beauty in the banal is a worthy goal in itself. It also may have unintended positive effects. I am wondering, for example, what the impact of this type of slowing down would have on our rates of consumption.

Sarah earned her Master of Fine Arts in Photography from the University of New Mexico in 2002 and holds a BA in cultural anthropology from Bates College. She has exhibited her work throughout the United States. Her exhibition record includes: 222 Shelby and Hahn Ross in Santa Fe; Galleri Urbane in Marfa, Texas; the Albuquerque Art Museum; Red Eye Gallery in Providence, Rhode Island; Tamarind Institute; and Chenevert Green in Houston, Texas among others. Sarah has also received numerous awards, grants, and recognition for her work, including a Creative Work Grant from the Art and Technology Center in Albuquerque, New Mexico, and a Hoffman Mellon Grant. Sarah has also been awarded artist residencies at the Jentel Foundation in Sheridan, Wyoming, and the Kala Art Institute in Oakland, California.

Sarah served as the Lennox Visiting Young Artist at Trinity University in San Antonio, Texas for the 2004-2005 academic year. She has also taught art at the College of Santa Fe, Skyline College, San Mateo, CA; U.C. Berkeley Extension, San Francisco, CA; City College of San Francisco, CA; and the University of New Mexico. From 2010 through 2018, she taught photography, video, art history and new media at New Mexico School for the Arts. She currently teaches photography at the University of New Mexico in Albuquerque.