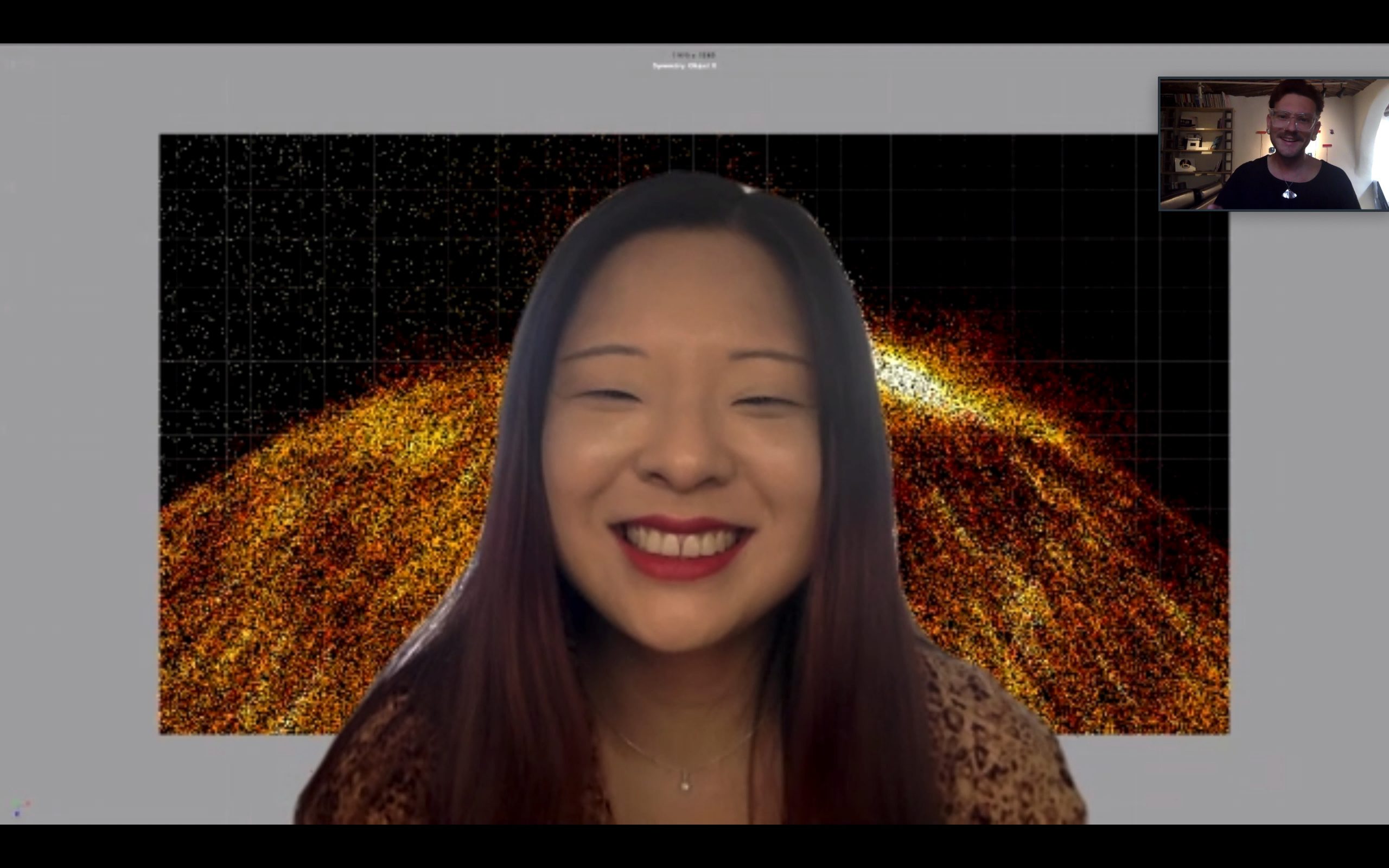 Snow Yunxue Fu is a new media artist, curator, and Assistant Arts Professor in the Department of Photography and Imaging at NYU Tisch School of the Arts. With an appreciation for the multicultural history of landscape painting, Fu addresses the sublime through topographical computer rendered animation and immersive video installation. Fu’s work has been shown internationally in solo shows, group exhibitions, screenings and festivals.

“Bask” (2019) is a 3D animation utilizing Maya particle simulation to recreate satellite image sequences of the sun’s corona and photosphere. It is an exploration of our use of imaging when processing experiences that go beyond limitations of our physical perception. The entity of the sun, which from our vantage point is functionally infinite and blinding, is processed as images representing what we cannot naturally see, and then synthesized through particle simulation, recontextualized and recreated within the techno sublime for our exploration within a virtual liminal space – a reversal of our experience as observers of the natural sublime.

“Planet Domes” (2019) is a Maya particle simulation piece that utilized NASA images of the galaxies as the ready-made source of simulation. With the view from a 3D camera from the side, the half semi-sphere of the particles accumulate through time and showcasing the different colors and meditate on how much data that usually is collected in order to construct those extra-celestial images.

Liminality-Liminoid is a two-month long solo exhibition of the New Media Artist Snow Yunxue Fu, located in the 2,000 square foot ground floor of Multispace NYC in Manhattan’s Chinatown. Fu’s artworks are set within a corridor, where Plato’s allegory of the cave is revisited through contemporary New Media Imaging technologies. Fu showcases new and selected digital work, ranging from VR, projections, and video installations. The artwork in the show demonstrates the relevant experimental approaches that her practice embodies among her New Media artist peers in this unique era where powerful technology is accessible for those who are determined enough to wield it.

Working primarily with 3D software, Fu creates scenes of experimental abstraction that translate the concept of liminality into the digital experience. The word liminal is often used to discuss the sublime within digital space and the VR experience, conjuring up notions of time, space, and perception, and echoing the experience of the sublime in nature. The word is borrowed from the field of anthropology, as anthropologist Victor Turner described as “the quality of ambiguity or disorientation that occurs in the middle stage of a rite of passage,” which “serves not only to identify the importance of in-between periods, but also to understand the human reactions to liminal experiences.” Fu’s work draws parallels between the physical, virtual, metaphysical, and multi-dimensional, setting the viewer in a liminal space at the threshold of each in what Turner called “a period of scrutiny for central values and axioms.” Digital space and the VR experience is what Turner would later make a distinction for as a liminoid experience, differing from the liminal in that the liminal engages in an experience out of our control, while the liminoid is a choice, often relating to play. Liminoid, then, is a simulation of the liminal, as the techno sublime experienced through digital space is a simulation of the sublime in nature. Within a digital space, we are offered an encounter to reflect on our response to the simultaneously beautiful and overwhelming artifice of the techno-sublime.

Artists mentioned in the interview are: