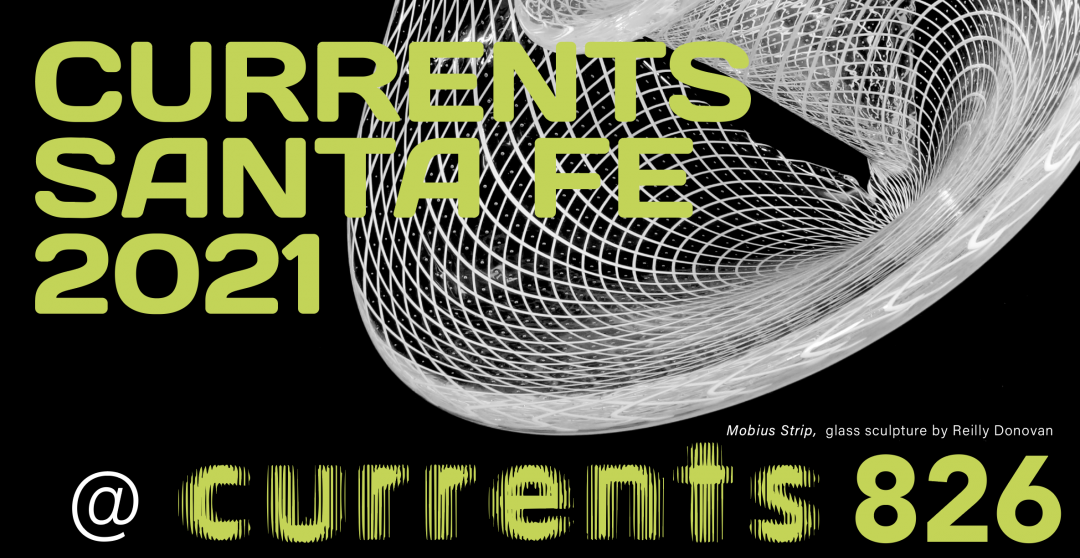 This summer, Currents 826 will be showing work from several new media artists in conjunction with CURRENTS’ main exhibition at CCA Santa Fe. The show includes work by Afrah Shafiq, Reilly Donovan, Joan Perlman, Maxime Corbeil-Perron, Mint Boonyapanachoti & Michelle Hessel and will run during the festival (June 18-27) and throughout the summer. The works on view at our year-round gallery space range from videos to glass sculpture to new media prints.

AFRAH SHAFIQ is a multi / new media artist based out of Goa, India. Using the process of research as a playground, she brings together the verified world of facts, history and archival findings; linking them to a speculative world of feelings, folklore and fantasy. She often makes interactive-hybrid forms using animation, code, sound and the handmade, seeking ways to retain the tactile within the digital and the poetry within technology.

Her work has been shown at the Lahore Biennale, the Kochi Muziris Biennale, Computer Space Bulgaria, Kostka Prague, Marfa Open & Fusebox Festival TX among others. She has been a research fellow at the Institute of Advance Studies in France and attended residencies at Fluent Collaborative in Austin and the Liverpool Biennial of Contemporary Art. She is currently a research fellow with the Garage Museum of Contemporary Art, Moscow.

Joan Perlman is a Los Angeles-based visual artist. Her video work was an official selection of the 2015 Nordic International Film Festival at Scandinavia House, New York. Video collaborations include an installation created for the Heidi Duckler Dance Theatre in Los Angeles, and a video/sound project with NY electronic composer Laurie Spiegel. She recently completed a multi-channel work in collaboration with Irish composer Linda Buckley.
New work will be shown this month at the Los Angeles Center for Digital Art. Perlman’s paintings and video work have been shown in solo and group exhibitions at venues in the US and abroad, including Fringe Exhibitions, Los Angeles; Wave Hill, New York; The Long Beach Museum of Art, CA; Riverside Art Museum, CA; the University of San Diego; PØST Gallery, Los Angeles; Tufts University Art Gallery, Boston; the Hafnarborg Museum, Iceland, and Listasafn Árnesinga Museum, Iceland.

She is the recipient of grants from the Durfee Foundation, The American Scandinavian Foundation, the Puffin Foundation, and an NEA Artist’s Fellowship, as well as numerous US and international residency fellowships including The MacDowell Colony, Djerassi Foundation, Ucross Foundation, Musée d’Art Américain Giverny/Terra Foundation for the Arts, France, and Reykjavík Art Museum/SÍM, Iceland. Perlman’s work is the subject of essays by Lawrence Rinder, Derrick Cartwright and others, and has been covered in The NY Times, Hyperallergic and The Boston Globe. The artist has been featured on NPR in the US and Icelandic National Radio.
In 2017 Perlman’s video and paintings were featured in a two-person show with sculptor Lloyd Hamrol at the Pasadena Museum of California Art.

From 2015 – present, Donovan has exhibited nationally and internationally. In 2018, Donovan was an Artist in Residence at Pilchuck Glass School where he explored the intersection of glass and mixed reality using the Microsoft Hololens. He has instructed, assisted and collaborated with several high profile artists who are now moving in to virtual and augmented reality. Donovan recently collaborated with artist John Grade for a mixed reality installation at the Mystic Seaport Museum in Connecticut and the Anchorage Museum in Alaska. In 2019 Reilly will be an Artist in Residence at the Museum of Glass in Tacoma where he will continue to explore the intersection of mixed reality and glassblowing.

Michelle Hessel is a digital artist and designer based in New York City.  Her work inverts traditional storytelling, with a focus on interactive technologies and virtual representations of culture. With an interest in deconstructing the traditional ways in which we perceive the world around us, Michelle mixes traditional media formats, such as photography and video, with newer technologies. A common thread seen in her work is the documentation of narratives that focus on how personal stories and human interactions are intrinsically shaped by the environment in which people find themselves.

Michelle has a Master’s degree from the Interactive Telecommunications Program at NYU, where she also served as a Research Resident. Her projects have been featured by Interaction Design Association, Communication Arts, The Economist, VICE Media, IDocs UK, Pixel Show, Currents New Media Festival, and other international exhibitions and media outlets.

She has taught various topics related to Interactive Media Arts at City University of New York (CUNY), Fashion Institute of Technology (FIT), and at RLab – the USA’s first city-funded center for education around augmented reality technology and related topics.

Mint Boonyapanachoti is a Bangkok-born New York-based creative technologist and 3D designer working at the intersection of storytelling, art, and technology. Her work focuses on 3D capture and immersive visualizations that push the boundaries of reality and augment the potential of visual journalism.

Mint is currently part of The New York Times Research & Development Lab. There, she is exploring how technology can unlock new forms of storytelling and developing new methods to advance the way journalism is delivered and experienced by readers.

She has a background in Architecture and Design and a Master’s in Interactive Telecommunications from Tisch School of the Arts. Before moving to NYC in 2016, she worked in Japan and Thailand as an architectural designer and lighting designer, transforming physical spaces into magical places.

Maxime Corbeil-Perron is a composer and audiovisual artist whose work has been included in many international competitions and events. His work has been described as “pushing the boundaries of abstraction” and “defying any explication or labelling.” He is a polymorphous artist active for more than a decade in music, experimental cinema, and various performative forms of the moving-image.