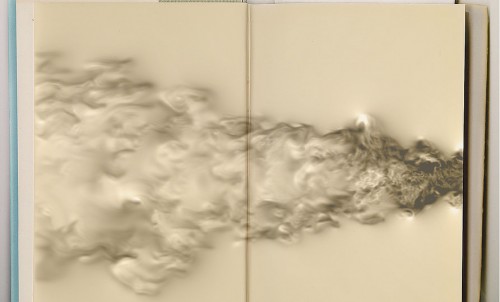 This exhibition was made possible by the generous support of the Thoma Foundation.
Presented at the CURRENTS 2016 Main Exhibition Venue
El Museo Cultural De Santa Fe

Technology has been prevalent in the art world since the early nineties. Alan Rath, Nam June Paik, Bill Viola, Jim Campbell to name a few have pioneered electronic, video, computer and interactive art, all summed up now under “media” art.  Along with the introduction of the digital camera to mainstream market, “New Genre” was introduced to art programs to address the use of technology as an art form. Engineers and artists started sharing ideas and exploring possibilities. In 2003, MIT graduate Casey Reas introduced Processing, an open source programming language built for electronic arts, and new media. With all that in place, generative art exploded and galleries and museums followed closely behind by embracing this new art form. Though media art is able to take a visual experience beyond the surface and sometimes turn the passive viewer into an active participant, it remains a challenge for many collectors. While Alan Rath and Nam June Paik consciously exposed the hardware like a canvas, Jim Campbell and Bill Viola made sure that the technology was as little invasive as possible and returned to the fundamentals of art, letting an image and an idea tell the story.

Moving forward fifteen years and a new wave of media artists find themselves fully immersed in the art market and equal to their peers – the painters, the photographers, mixed media artists and installation artists – thanks to the inevitable advance of the technology with smaller portable devices, enhanced visual displays, storage space and Apple. Media artists continue to push the boundaries of technology venturing into the software world taking a chance in exchanging ideas with a code rather than a brush. Where abstract painters often rely on intuition to free themselves of any conscious direction, media artists rely or create algorithms to alter and challenge the preset disposition of the software.

“CODE and NOISE” is an exhibition that presents fifteen artists from Chicago, New York, Los Angeles, the Bay Area, and China who use, create or leverage software to produce works that are engaging, stimulating and invite us to ponder many current issues such as the environment, memory, art history, data collection, emotions and surveillance.