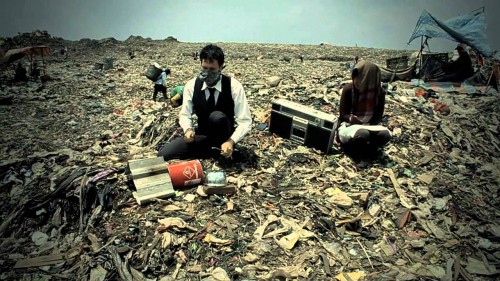 Filastine is the duo of composer/director Grey Filastine and vocalist/designer Nova Ruth. Before starting Filastine in 2006, Grey was part of the insurrectionary marching band Infernal Noise Brigade. He spent much of his life recording soundscapes & studying rhythm across the world. One of those travels brought him to Indonesia in 2010, where he met Nova Ruth rhyming in the hip-hop group Twin Sista. Since then Nova has added her rich musical roots to Filastine’s sound; she grew up singing pentecostal spirituals, koranic recitations in the mosque, and playing Javanese gamelan. They are now based in Barcelona.

Filastine’s compositions fuse contemporary electronic beats with concrete sounds, voices, percussion, and acoustic strings. This is future bass music from a future where the globe has been flipped, the sonic territories remixed, and syncopated mid-eastern rhythms and asian melodies shape a new urban sound.

Filastine will be followed by a Silent Disco with Djs and headphones for the audience. A $10 donation will be required for a set of headphones.