An Ocean Trapped Behind a Wall 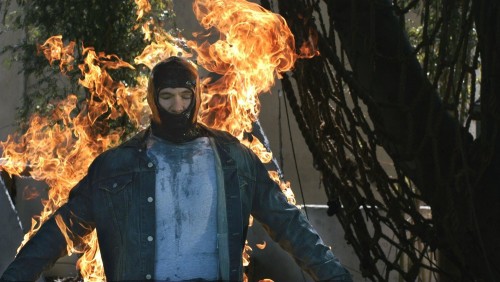 Visit the New Media New Mexico website for info on all of the statewide exhibitions in June.
Travel a Media Arts Trail through New Mexico’s spectacular landscape.

An Ocean Trapped Behind a Wall presents works in film and video by emerging and established artists whose projects share a preoccupation with the limits of historical and personal certainty. Together, these works highlight the instability of representation in an age marked by an unprecedented proliferation of images.

The title is inspired by participating artist Vishal Jugdeo’s experimental ethnography A Shaky Picture Has No Weight. Jugdeo’s piece begins with an anxious voiceover describing a vast ocean behind a low wall which can be apprehended as a presence before it is seen. An elegiac vision is created for viewers who are left in a dark space looking into an expanse without image, a black screen. This poetic introduction to Jugdeo’s piece gestures at what cannot be fully represented even while we sense its existence, whether it’s the unconscious, historical “truth,” or the reality of subjective experience. Jugdeo’s work, like many of those presented in An Ocean, evokes another boundary – the imaginary line between the staged work of fiction and the reality of the audience, known in theater as the fourth wall.

The works in the exhibition use theatricality to create a space for reflection, abstraction, and play. Drawing from cinematic tropes ranging from memoir and documentary to experimental ethnography, these works often expose the architecture of their storytelling, or the scene “behind the scene.” The effect is not a demystification of the work of art so much as a revelation of its complex relationship to the world it depicts.