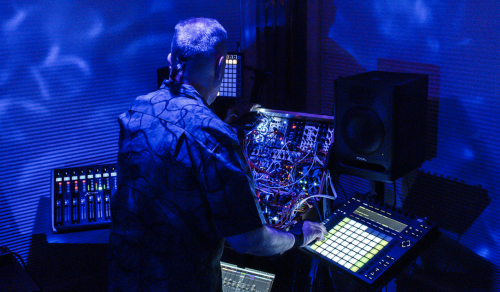 Location: CCA Studio Theater
$10 Admission | Limited Seating
Purchase Tickets HERE. If there are remaining tickets you can purchase them at the door.

James Coker (Meridian Alpha)
James Coker is a software developer, product designer, visual artist and musician living in Albuquerque, New Mexico. He got his start in electronic music at Stanford’s CCRMA computer music group. This sparked a lifelong obsession with electronic and experimental music, eventually leading to the creation of Five12 Inc. and the release of the Numerology sequencing software in the early 2000’s. In 2018, Five12 released the Vector Sequencer, a hardware sequencer for the Eurorack Modular format.
Jim will perform a new 4-channel work of abstract electronic soundscapes based around Scriabin’s “Mystic Chord.”
Links:
https://www.instagram.com/meridianalpha

Chris Meyer’s Alias Zone
Chris Meyer fell in love with electronics when he was 6, and with electronic music when 10. As a teenager in the 70s, he took lessons on piano, bass, and – of course – modular synthesizers. Since then, Chris Meyer has designed electronic music devices for companies including Sequential and Roland, and taught people how to use synthesizers through UCLA Extension, numerous magazine articles, his site Learning Modular, and by co-authoring the book Patch & Tweak which is considered to be the reference for the modular music field. Currently he crafts a unique blend of Ethno-Ambient electronic music under the name Alias Zone, including recent performances at Steve Roach’s SoundQuest Fest, the Phoenix Synthesizer Festival, and SynthFest France, plus an upcoming performance at Mountain Skies.

Jill Fraser
Jill Fraser is a composer and electronic music pioneer. She was mentored by Morton Subotnick, studied with Mel Powell and Earle Brown at CalArts, and attended master classes with, among others John Cage and Lou Harrison. After finishing her master’s degree in composition she worked at Serge Modular in Hollywood and took her modular synths into the Hollywood studios to score films. Her composing credits on film scores include Personal Best and Hardcore. Jill has composed both electronic and acoustic music for hundreds of TV commercials for Lexus, BMW, Honda, Porsche, Nissan, Mazda, Mitsubishi, Mattel, Carl’s Jr, NBC, Apple Computers, Adidas, Estee Lauder, Baskin Robbins, Yamaha Motorcycles and many, many others. She has won 3 Clios for original music and is a voting member of the Academy of Television Arts and Sciences. She toured with singer Buffy Sainte Marie and performance artist Ivan E Roth.
Jill will be presenting an excerpt from her newest body of work, Earthly Pleasures. With this, she is to take old revival style hymns from the late 19th and early 20th century and re-imagine them for a post religion universe of far future generations or non-human intelligence.  How would archeologists thousands of years in the future interpret musical data that for so many represents faith and salvation for humanity? What useful purpose might they think these hymns had, meditation, revelation, some cryptic message? Her aim is to retain the inspiration and magic of these old melodies morphing them into service beyond religion, beyond myth into an unimagined future.
Links:
https://www.jillfrasermusic.com
https://jillfraser.bandcamp.com/releases
https://www.zzyzxsociety.com

Sandbox Series is a live performance festival of electronic and improvisational music featuring solo and ensemble performances dedicated to the attitude of openness and discovery primarily through sound.  More at www.sandboxmusic.org