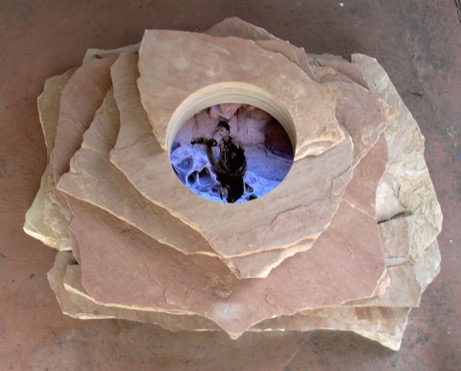 “Stone Stories“, a video installation by Susanna Carlisle and Bruce Hamilton,  is presented by the CURRENTS NEW MEDIA FESTIVAL 2017 in collaboration with the New Mexico History Museum.

June 1- 25, 2017
It will be on view in the lobby of the Museum.
Free Admission to view this installation.
Admission will be charged if you wish to enter the Museum’s main exhibition.

The configuration of the stones is a reference to the Indian ruins of the Southwest built by the Anasazi who are thought to have left the area due to drought. The circular openings may be interpreted as Kivas representing Native American spirituality or dried up wells expressing vanishing water and the fragility of the source of life.

The video reveals the Native American communion with the earth. The image of the indigenous performer blends into the stone walls of Copper Canyon in Abiquiu, suggesting how Native culture and all that it honors is deeply rooted in the earth. Image, movement and sound interpret the ancestral blood memory of the stories nestled deep within rock, bone and antler. An expression of animism – the belief of spirit inherent in all things – is revealed as the camera becomes a quiet witness to the human body meeting the form and texture of the earth and its creatures in a continuing song of merging and individuation. The performance with skull and antlers honors the Native American belief that it is the deer who choses the hunter instead of the other way round.

The music, Shamansong, was composed by Joan La Barbara. Santa Fe musicians Polly Tapia Ferber and Erika Duke Kirkpatrick joined La Barbara on this work. Most of the voice and percussion recordings were done at a location high up in the rocky cliffs of Diablo Canyon near Santa Fe, utilizing the natural acoustical environment of the land with ravens, echoes, and thunder.