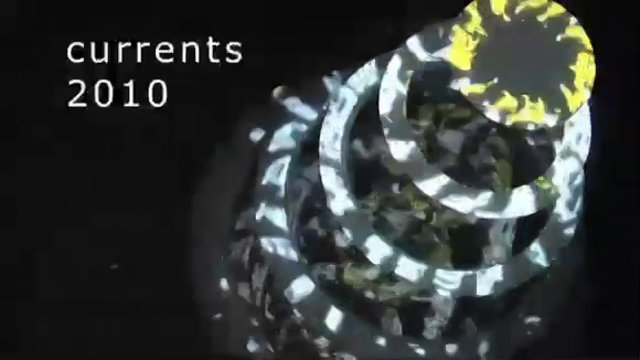 In June of 2010 Parallel Studios was able to implement many of its goals in presenting CURRENTS NEW MEDIA 2010 at El Museo Cultural de Santa Fe in the newly created railyard district in the heart of Santa Fe. The exhibit coincided with Site Santa Fe’s 8th International Biennial with SITE Santa Fe acting as one of our sponsors. The exhibition took place in 17,000 sq. ft. of El Museo’s complex. El Museo, a non-proﬁt organization, acted as our ﬁscal agent. We presented the work of 50 adult artists from the U.S. and around the world as well as 22 local high school students.

During its 10 day run – June 17th – 27th – 2000 people from all walks of life passed through the exhibition. It was received with widespread acclaim by the art savvy as well as those who previously were unfamiliar with this type of work. The visitors were from all nationalities and social/economic strata. This let us see that one of our chief priorities–to engage individuals from a broad demographic while at the same time presenting state of the art, world class exhibitions – was truly possible.

Other goals we were able to realize at CURRENTS NEW MEDIA 2010: We presented the work of 22 local high school students. Their work was presented for the duration of the show in one of our four screening rooms. On the second Saturday of the run we projected their work on a large screen and had an opening for them. Our future plans are to engage students throughout the school year with a program of on campus presentations and lectures.

40 teens ages 12-15 from the local Boys and Girls Club visited the exhibit on a ﬁeld trip and were thoroughly engaged. This is part of our program we intend to expand in the coming years in order to bring in more youth groups not only from Santa Fe but from other towns in our region.

10 of the artists from around the U.S. who participated in the exhibit were able to attend. Together with the the local and regional artists who were present they were able spend time !together in a very collegial environment to share information and experience. They all expressed to us what a rewarding experience this was. Our plan next year is to formalize this into hands on workshops in techniques and approaches to this medium.

For this exhibition we had 2 interns from the University of North Texas in Denton. They are receiving credit for their internship.

A Diamond Forms Under Pre...

Objects in Black and Whit...

On the Problem of Appeara...

Tales of a Sea Cow

The Development of Space

The Epic Crossings of an ...

The Oldest Song We Know

The River is a Mirror

The Stepping Up and Going...

There is no future: relax

Through the Silent Land

While She Waits for the L...