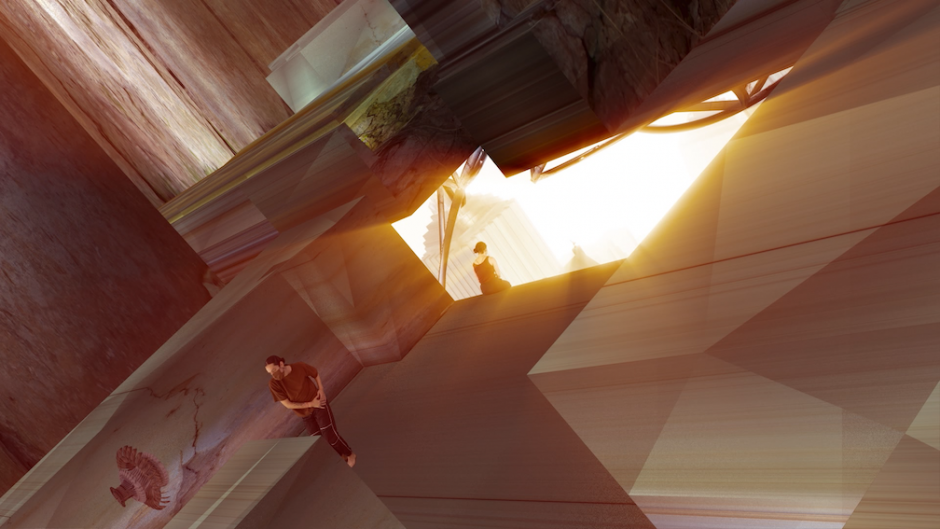 Robert Campbell
Animation, Single Channel Video
CURRENTS NEW MEDIA 2021 @ Center For Contemporary Arts
Work on Journal Entry began in the summer of 2020 as a digitally-constructed visual exploration of the felt effects of increasingly severe annual wildfires here in the Pacific Northwest, particularly amplified recently during the coronavirus pandemic: hazardous air in the environment for days at a time; the muted orange cast of the sunlight due to the particulates suspended in the air; the increasing sense of anxiety about global climate change and our collective lack of/slow response.

I teach at Cornish College of the Arts, located in a part of Seattle, Washington where the aggressive urban makeover going on in the city is most concentrated. In addition to the focus on smoke in the air, the chaotic urban imagery in Journal Entry is also focused on the felt effects of the intensity and scale of the destruction/construction (another big source of air pollution) in the city where I work.

In Spring of 2021, I was offered a chance to teach a course titled Creating Digital Performance in the Dance Department at Cornish as a pandemic replacement for a Cornish Dance Theater experience where Dance students work with a faculty choreographer to create an original work performed live in a series of evening performances near the end of the semester. So I began working with a small group of dancers each Saturday, inviting improvisational movement as well as scripted events into various green screen facilities to collect footage to integrate with the digitally constructed environments I had been steadily working on since the summer. We began each week’s work with a review of the composites I had made from the footage gathered the week before, and through discussion and sharing of ideas, we would compile a list for that day’s green screen shots, with attention to camera angles and lighting. In this fashion, the piece kind of built itself over time, little by little.

My post-production/compositing goals were to layer the atmospheric elements in each shot, find a through line with the music of Steve Peters, whose compositions occupy the entirety of the soundtrack, and hopefully find a form of cinematic storytelling that resides more in the realm of mythos than it does in logos.

and Cornish College of the Arts.