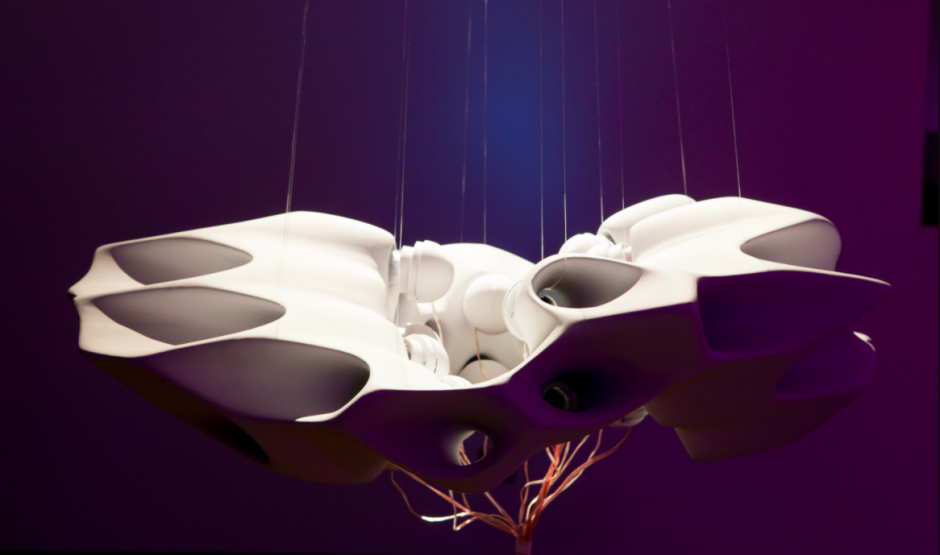 Sölen Kiratli & Akshay Cadambi
Interactive New Media Installation
CURRENTS NEW MEDIA 2018 @ El Museo Cultural de Santa Fe
With "HIVE" we intend to explore the idea of a sonic intelligence: learning, experiencing, reacting, and finally, “thinking” in sound. Can we model such a system? A system with a body whose morphology is based on picking up and sending sound signals, a system who can learn from its environment and evolve in its response, a pseudo ‘being’ that traces our sonic foot-print and projects our sonic reflection.
Created by fusing aspects of sculptural form, spatial sound, and interactive methods, "HIVE" explores the relationship between sound, space, body, and communication. "HIVE" was produced in 2016 by Sölen Kiratli and Akshay Cadambi and debuted in Santa Barbara Center for Art, Science, and Technology (SBCAST) in December of 2016. It will be exhibited at ACM SIGGRAPH Asia 2017, in Bangkok, Thailand, November 28 through 31. More info at solenk.net/HIVE.php"