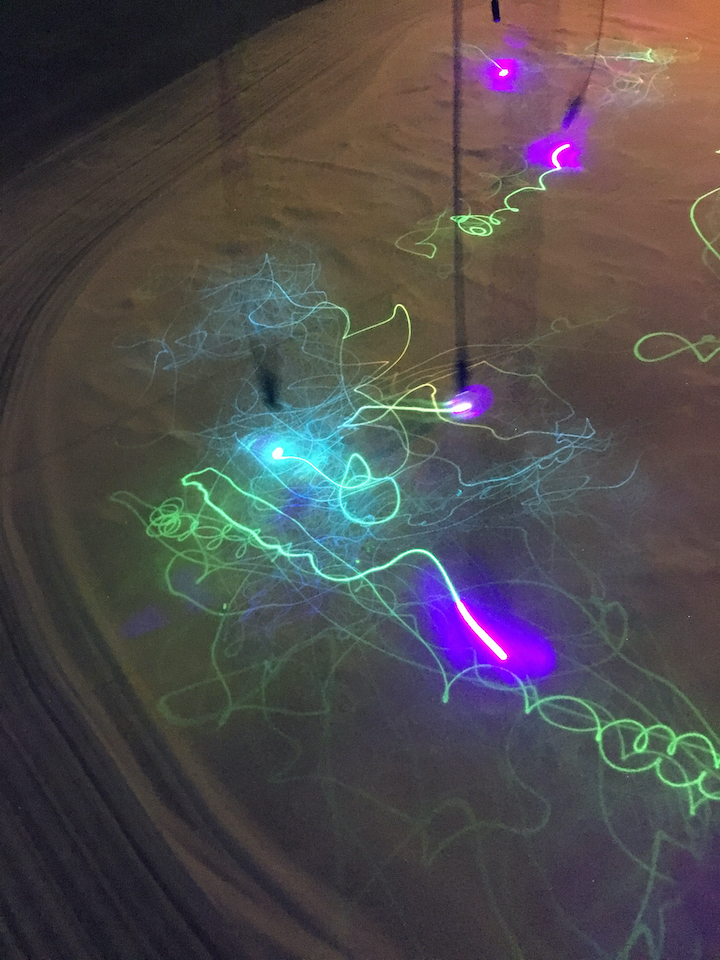 Sally Weber
New Media Installation
CURRENTS New Media 2020 @ El Museo Cultural de Santa Fe
Everything vibrates on the elemental level.
Unlike the predictable, rhythmic pattern of a pendulum determined by its resonant length, thirty laser pendulums spin, twist, swing pass by each other, and alter their patterns chaotically to draw erratic trajectories on a ring of white sand laid beneath them on the floor. Informed by the jitter on the most archaic and elemental level of life, inFLUX captures the random interaction between the pendulums. The violet light from the lasers leaves colored traces of their paths across the sand. Over time, past lines fade and are overdrawn, building a matrix of patterns in the sand. With subdued gallery lighting, the density of the patterns become apparent and suggests nebula, glowing through clouds of gas.
This is the dance of inFLUX. The dance of particles whipping around and colliding in the CERN supercollider, forming new bonds in chemical reactions, creating life as molecules combine and build structure as the basis of all life at the most elemental part of our being. It's our core, the fundamentals that bind our body and all matter together. Emotionally, bonds between us hold us together as well. The support of others, those interconnections, are a larger expression of the infinitesimal within.