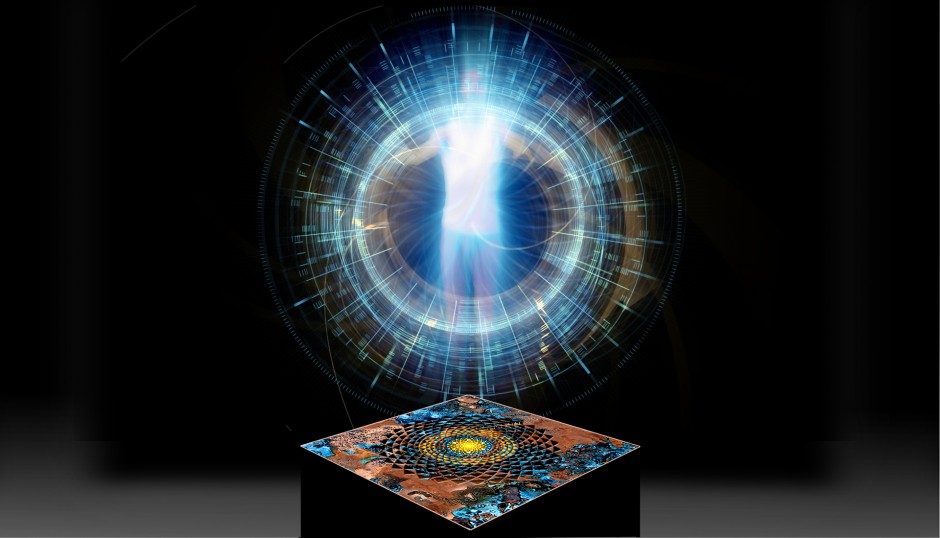 Max Almy & Teri Yarbrow
Interactive New Media Installation
CURRENTS NEW MEDIA 2016 @ El Museo Cultural de Santa Fe
external media
A retabla is traditionally a screen behind an altar portraying glorified iconic figures
and is often created as an offering after a pilgrimage.
In this new interactive video installation, Max Almy and Teri Yarbrow have
created a contemporary, electronic version of a retabla with a Copper/LED table
and a high-tech holographic screen. Movement over the table triggers motion
activated projections of digitally illuminated iconic figures.
The digitally cut, patinated copper and LED tabletop is an interactive field. As
viewers interact with the light and patterns emanating from the LED, patterns and
figures are triggered on the screen.

Retabla is sponsored by Production Resource Group, (PRG), the largest
entertainment technology production company in the world. They donated a
Halo-Gauze projection screen for this year's Currents. It is a newly engineered
technology from the UK that is a highly transparent and highly reflective fabric for
creating 2D and 3D holographic effects and is one of only two screens in the
country.