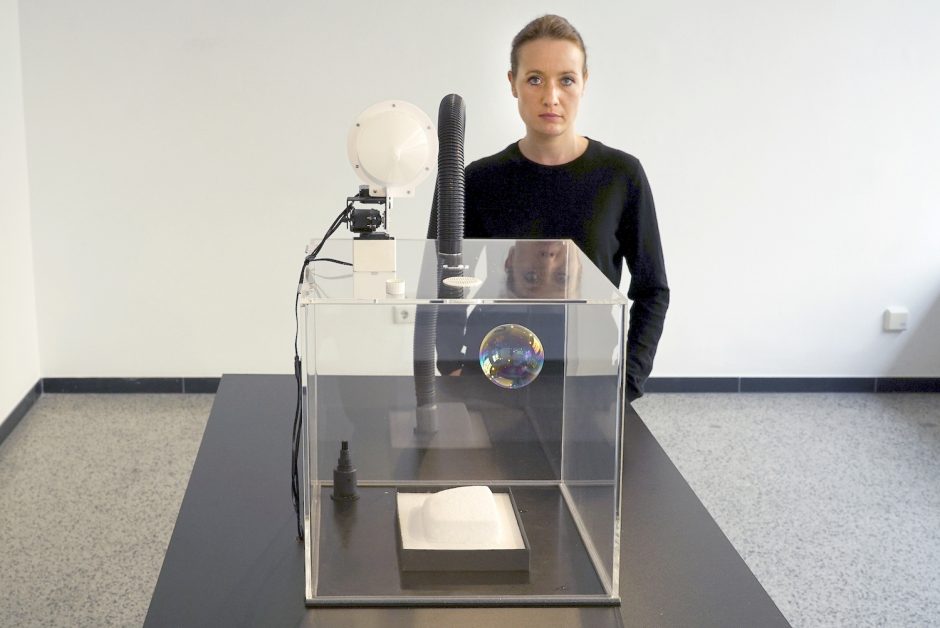 Verena Friedrich
New Media Installation
CURRENTS NEW MEDIA 2017 @ El Museo Cultural de Santa Fe
A soap bubble usually remains stable for only a short moment. Due to the force of gravity and the thinning of the membrane it bursts after a few seconds and is irretrievably lost. As one of the classical vanitas symbols the soap bubble traditionally stands for the transience of the moment and the fragility of life. THE LONG NOW approaches the soap bubble from a contemporary perspective – with reference to its chemical and physical properties as well as recent scientific and technological developments. THE LONG NOW is aimed at extending the lifespan of a soap bubble. Using an improved formula, a machine generates a bubble, sends it to a chamber with a controlled atmosphere and keeps it there in suspension for as long as possible. The project is presented in the form of an experimental set-up in which the newly created soap bubble oscillates permanently between fragility and stability.

THE LONG NOW was realised within the framework of EMARE Move On at OBORO’s New Media Lab, Montréal, and a residency at Rustines|Lab, Perte de Signal, Montréal. With the support of the Culture 2013 Programme of the European Commission, the Goethe Institut, the Conseil des arts et deslettres du Québec and FACT.