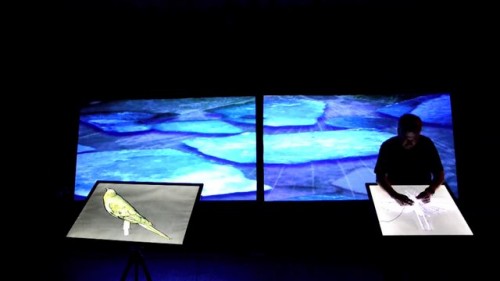 Presented are performance excerpts from “ArthropodaChordataConiferophyta” (2013) – a work of afterlife cinema that seeks to reanimate the residues, record and archives of lost ecological memory. The performance-based work follows the intertwined cycles of life to the afterlife through interactive cinema as sensorial access to complex biological, ecological and biogeographic residues across a spectrum of scales from the phylogenomic to the biospheric. The performance-based work will gesturally and algorithmically explore the re-animation of the digital residues of lost and endangered lifeforms from three phyla; Arthropoda (from endangered and lost insect migrations), Chordata (from the cascaded of bird extinctions in the 19th and 20th centuries), and Coniferophyta (from the waning survival of ancient forests). The sonification and visualization of these ecoinformatic sources (including ancient DNA & extinct/endangered protein sequences) will be immersively experienced through the mixing of ambient field video from lost ecosystems via ecological simulation models and live performance through morphological drawing and electroacoustic instrumental interfaces. The hope of this project is that audience engagement will yield a vision and recollection of the complex imagined distance when ecological memory becomes lost to the circumstance of extinction.